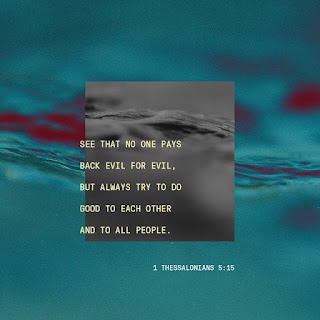 This morning, my YouVersion Bible app has 1 Thessalonians 5:15 as the verse of the day and created this nice image for social media.

I was intrigued to look a little more into this verse and what other commentators, or writers had to say about this verse also using my new Logos 7 Gold bible software and here is one quote from Richard Baxter and then I have shared my thoughts of this as well.

Richard Baxter said, "If you believe that Christ was more worthy of imitation than Cæsar or Alexander; and that it is more glory to be a Christian than to be a conqueror, even to be a man than a beast, which often exceed us in strength; then contend with charity, and not with violence; and set meekness, and love, and patience against force; and not force against force."

It behooves us as Christians that neither the action of revenge, nor the attitude of resentment should ever be part of the Christian experience toward anyone. Christians are to demonstrate actions and attitudes of grace toward everyone, in the same manner that God has done for us.

While each one of us has a responsibility for our own conduct, Paul also addresses the fact that the whole community of believers is to make sure that the conduct of each other isn't contradictory to Christian character also.

Getting even in any way doesn't display Christian character, whether it is seen or unseen. Only grace toward those who are ungracious is the attitude and action that God should see in each one of His children.

If we look closely at this, a person either fails in complete disobedience to the Great Commandment to love God and to love others, or they obey it.

All of our relationships then need to be examined, to see whether or not we have, or are right now displaying Christian character that is unlike Christ and what God has shown toward us and correct it immediately.

I'd rather live on the side of graceful conduct before God, than to have God be displeased by my selfishness, by having an attitude of revenge, or retribution toward someone else.

Is there someone you need to forgive, or to seek to do good to them, by asking for their forgiveness?

Thanks, Kurt, a much needed topic and post for these ever increasing difficult and wicked times!
So practically laid out!!!